The title Quantum Reality as an intellectual starting point referring to a more advanced, quantum-mechanically based mindset. Classical physics describes aspects of nature at an ordinary macroscopic scale whilst quantum mechanics explain the aspects of nature at a small atomic and subatomic scale. Much like the elementary particles and atoms that can be present in several places at the same time, the absurd nature of the quantum world suggests that several realities exist simultaneously.  What are then the implications concerning our comprehension of reality? Are we able to truly perceive it as it is?

The uncanny strangeness generated from these philosophical and metaphysical inquiries is the impulse for me to create multidimensional installations, establishing a playful interpretation of the universe’s architecture and its unlimited possibilities. Inspired by Alan Watts’s reference to Hidiggerian themes regarding time and being, I created ‘Quantum Reality 1.0’ and delved into exploring the gap between presence and nothingness.

QR 1.0 consists of movable and dynamic materials such as fabric, rope and threads resembling a setup often featured as part of the stage design. In addition it combines paintings, sound composition and live performance. By merging all these different disciplines, I intended to artistically challenge the inter-relationship of energy, matter, and mind – raising the question as to whether all these elements are ultimately one.

‘Dark Matter’ and ‘Dark Energy’ are represented in this work in the form of colour and movement.    The use of black cloth against a dark background is meant to evoke the idea that our ability as humans to detect life, movement and existence within the unknown realm is limited although possible.

Draped in a full-body suit under a large black mass installation fabric as I perform, revealing the human contours of my body, yet at the same time appearing as an abstract undefinable form.            As the audience is preoccupied with deciphering whether the movement under the cloth is generated by a human or a machine a strangely familiar experience is triggered, raising questions of one’s own perception of the body and self.

The performance is accompanied by a composition of fragmented sounds with English philosopher Alan Watts’s voice: “The idea of a difference between matter and spirit, doesn’t work anymore”. 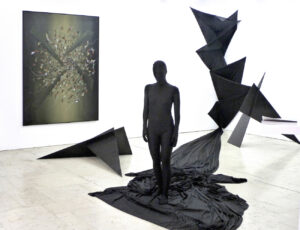 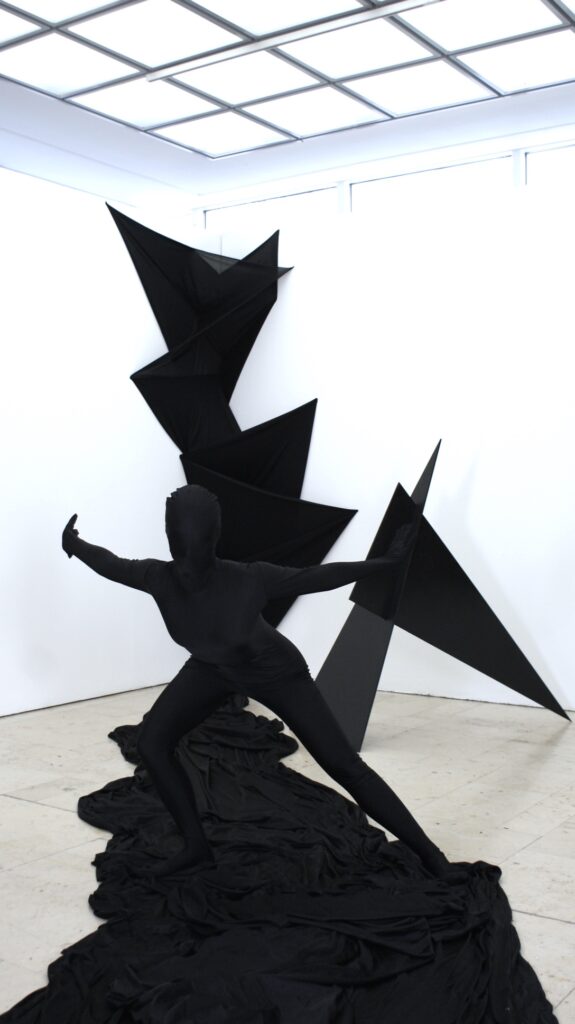 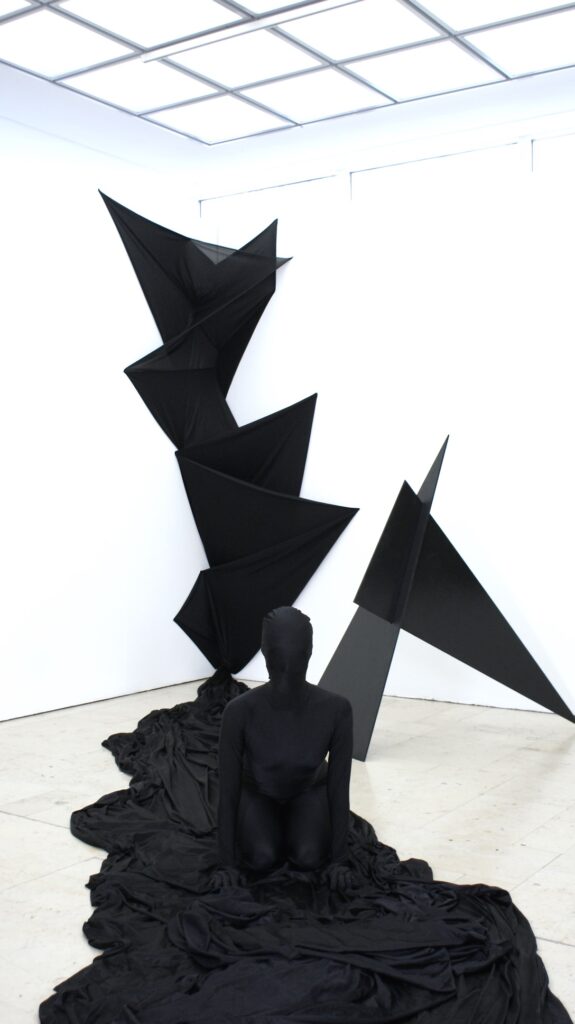 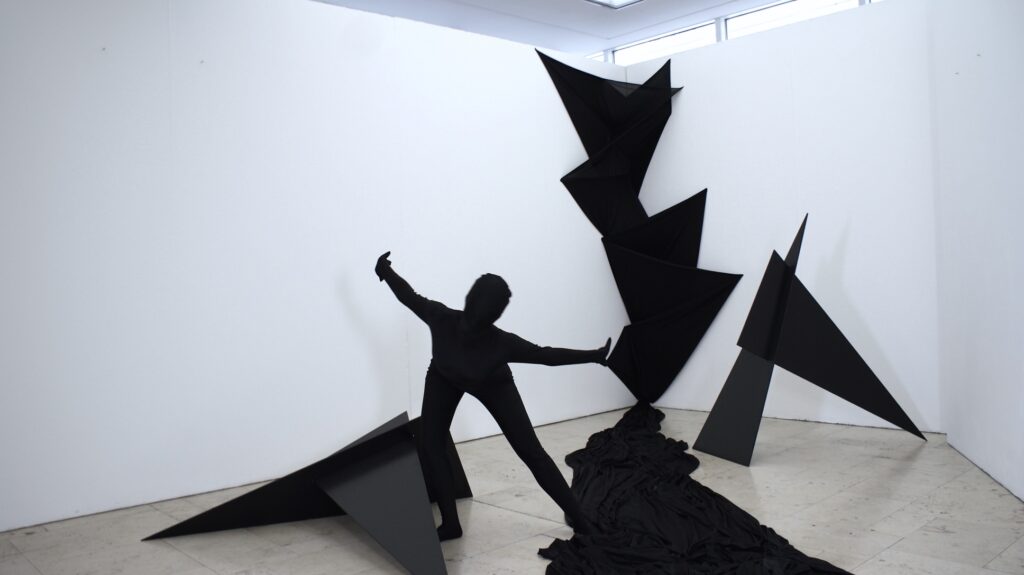 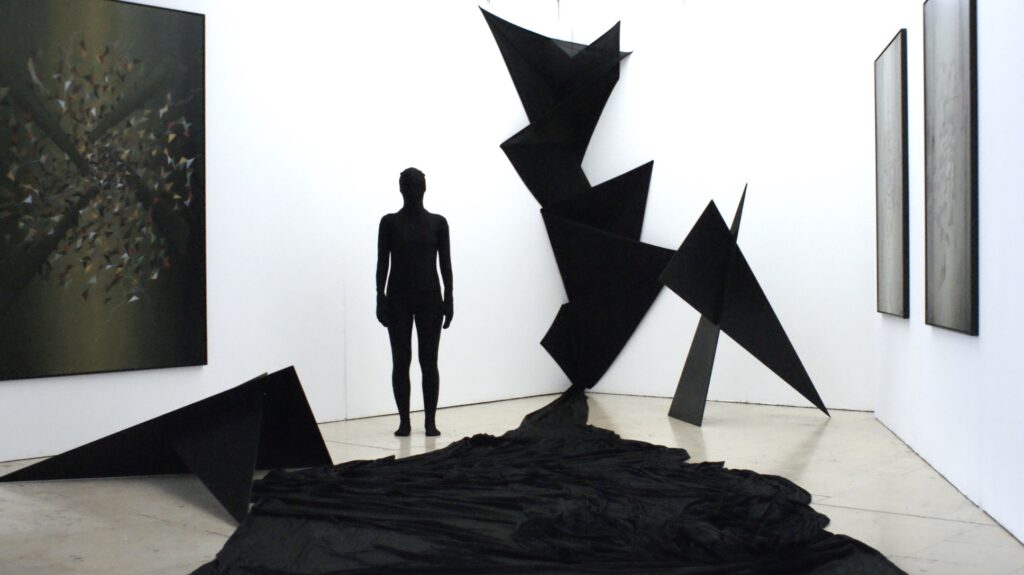 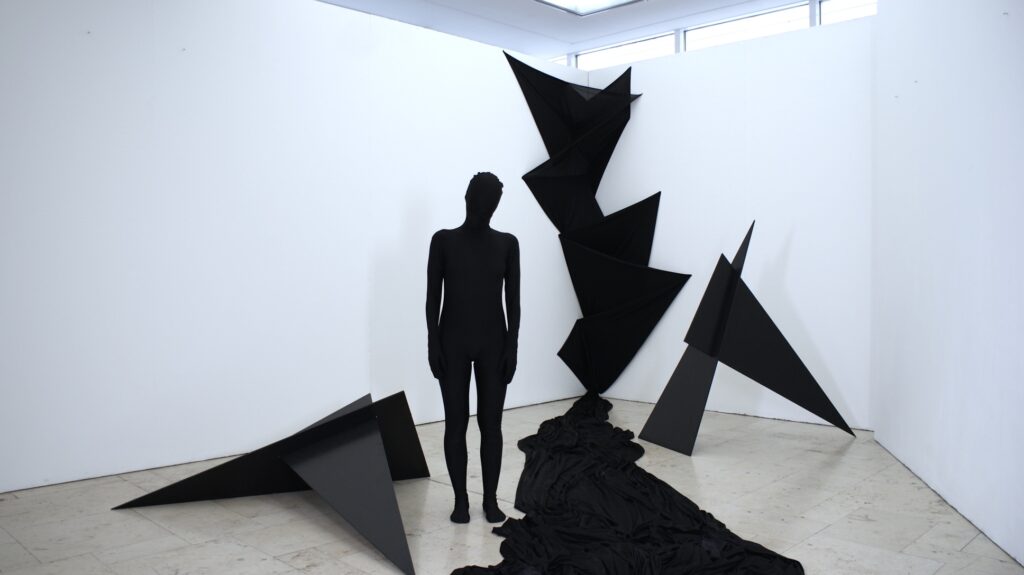 As a complementary piece for QR 1.0 and QR 2.0 I wish to create an additional video installation which is intended to be presented in a separate exhibition space and function as an introduction to the live performance.

The idea for this work came about from my personal experience as an expat living in Germany, feeling as though my memories of the past, present happening and future projections intermingle. It is also inspired by the ‘Block Universe Theory’ and the concept of multiple dimensions and realities, focusing on the fragmentation of time yet the possibility of past, present and future existing simultaneously.

According to quantum superposition principle elementary particles and atoms can exist in multiple overlapping states simultaneously. In the absurd nature of the quantum world, several realities exist simultaneously. What are the implications on our perception of time and our possibility to travel through it?

The video installation will consist of a 3 channel video, 3 projectors and 3 screens on which the dark, undefined art figure will materialize itself out of an abstract darkened background. This is the same figure spectators will encounter as they proceed into the main exhibition hall.

The three videos will be projected simultaneously, though each will have a different starting point and ending point. At times two identical images are projected onto two screens simultaneously will appear creating an almost strange yet orchestrated synchronicity.

The duration of each video is intended to be ten minutes and it will be played in a loop, cultivating the concept of nonlinear time and our limited perception of it. By situating three dark screens in a darkened room I aim to generate a sense of emptiness, of a gap between presence and existence, a merging of past, present and future.